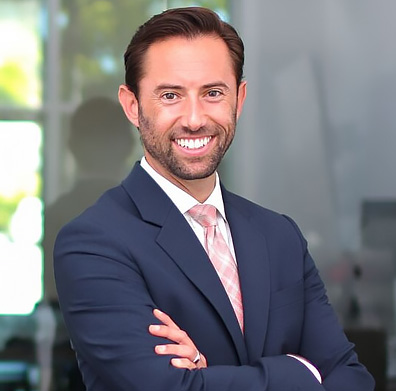 “I became a trial lawyer to help people. When we fall on hard times, especially caused by someone else, we all can use a hand. I’ve been fortunate enough to have help in my life and I’m here to return the favor.”

John Michael Montevideo became a trial attorney to help people. He dedicates his practice to sharing his clients’ stories and bringing them justice for the wrongs committed against them. He is the Founder and Lead Trial Attorney of Montevideo Law, PC.

Being a Trial Lawyer is in John Michael’s blood. As an Orange County native, he comes from a strong family-line of trial attorneys in the area and has been widely recognized for his own accomplishments. He is a past Finalist for the prestigious state-wide CAOC Street Fighter of the Year Award in 2013 for a successful trial verdict in Orange County 9-times the amount of the last offer before trial, named a Super Lawyer Rising Star 2014-2017 (reserved for only the top 2.5% of lawyers) and is a Graduate of Gerry Spence’s Trial Lawyers College. John Michael has recently been named to the Up-and-Coming 100 Rising Stars in Southern California and Up-and-Coming 25 in Orange County. John Michael is also an active member in the local Orange County and state-wide California legal community as a Board of Director for Orange County Trial Lawyers Association (OCTLA), a Board of Governor of Consumer Attorneys of California (CAOC) and an Associate Board member of the Orange County Bar Foundation (OCBF).

John has just been named to the list of Top 100 Civil Plaintiff Trial Lawyers in CA. Click here to see a copy of the Press Release.

A Wide Range of Legal Experience

Prior to founding Montevideo Law, PC, John Michael honed his legal skills in a variety of practices, including the largest business and litigation firm in South Carolina Haynsworth Sinkler Boyd, P.A., three prominent Los Angeles, San Diego and Orange County plaintiff trial firms and public service in the government sector with the Department of Justice in their Environmental and Natural Resources Division; Environmental Enforcement Section in Washington, D.C. An additional interesting work history tidbit includes his work on the Major Motion Picture “American Gun” in Hollywood, CA where he was involved in casting, filming, and pre and post-production.

After earning his degree in Business Management and Marketing from Loyola Marymount University, John Michael dedicated a year of service to the Jesuit Volunteer Corps (JVC) in Houston, TX. He served full-time with Vita Living, Inc., a non-profit working with those with mental and physical developmental disabilities. It was during this time of service that he became inspired to pursue his legal career to help people vocalize and fight injustice. John Michael went on to earn his Juris Doctorate near the top of his class from Howard University School of Law in Washington, D.C.

When John Michael isn’t in trial, he enjoys getting out for a run, laughing with his wife and two kids, being a “weekend warrior” with his home repairs, bodysurfing and backpacking. He is proud to join his family in living out their strong Italian heritage and maintaining their rich cultural traditions. Buona Fortuna!